Facility, Member Of The Month, News 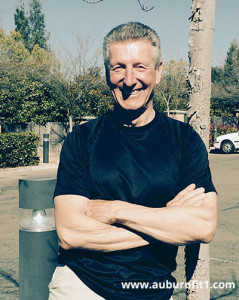 Reinhard has been a member of Auburn Fit1 with his wife Stephanie, since June of 2012. He visits the gym 3-5 days per week and a little less when he is out cycling or skiing. Reinhard appreciates the proximity of Auburn Fit1 to his home and the bright atmosphere.

Reinhard moved from Munich Germany to the United States in May of 1968. He visited Canada and the Midwest before moving to Sacramento in September, 1968.Reinhard’s father was a physician in sports medicine and he advised to stay away from professional sports and work up to a slight sweat every day.

Manager, Jamie Vinciguerra asked Reinhard to participate as the monthly Member on Fire. When they sat down to chat about fitness and his accomplishments, Jamie was enthralled with the resume that Reinhardt had to share.

Transferred from the University of Munich in Germany as an accomplished soccer player, for the first time in his life, he began playing football at Sacramento State as a kicker. Jamie thoroughly enjoyed reading a newspaper clipping about his first kick resulting in a 60 yard field goal! He has played professional soccer nationwide for the Sacramento Senators, Sacramento All Stars, Sacramento Spirits, and Sacramento Gold. In 1977 he was selected to the All Star team of the American Soccer League (ASL), a national professional league. He achieved the United States Soccer Federation’s “A” license, the highest coaching license in the country.

Running into his forties, he ran into injuries. Having used cycling as a fitness sport, he tried to satisfy his competitive urges and pedaled his way into competitive cycling. In January, 2012 he had a biking accident and had to have his hip replaced. He continues to cycle and competed in several national races. In 2013 he had the 3rd best time in his age group in the national championships. Skiing Instructor in Germany and the United States. Made money to get himself through college as an instructor. When Reinhard arrived in the Sacramento area, he became a part of the ski team and also instructed. He met his now wife, Stephanie, who was also a part of the ski team. Her good Spanish looks and embracing Reinhard’s athletic lifestyle forged a lifelong relationship of 45 years! Stephanie’s culinary expertise fueled Reinhard’s body and soul.

Reinhard owned and ran Goal Kick Sport Shop, specializing in soccer and rugby in Sacramento for 31 years. He and his partner (on the soccer field and in business) coached from high school, collegiate up to the professional level and provided youth coaching clinics for 15 years.

Auburn Fit1 appreciates Reinhard and Stephanie’s membership and thanks Reinhard for sharing his accomplishments and stories.