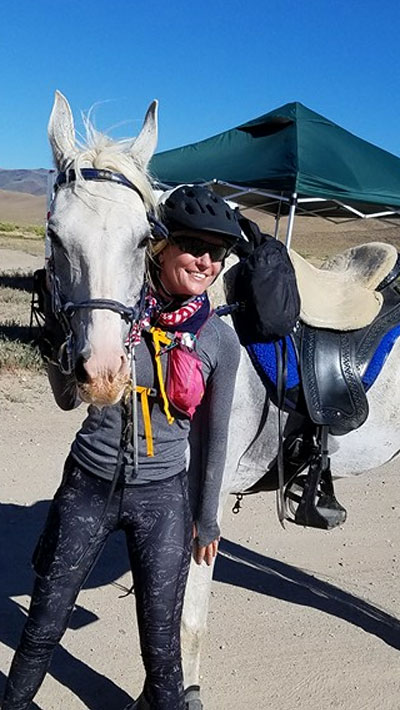 Cristine has been a member of Auburn Fit 1 since May of 2014. Cristine and Leon are being featured together as they had planned to ride in the Tevis cup on Saturday, July 23, 2016. This would have been the second ride for Cristine and Leon as they also rode and completed theTevis cup in 2010. Sadly, just days before the race, Cristine decided to pull out of the Tevis cup after a veterinarian checkup determined that it would be in the best interest for Leon.

Cristine began her training for Tevis in December of 2015, when she joined the small group personal training sessions held on Tuesday and Thursday at 6:30 a.m. In addition to her weight training, Cristine incorporates running and yoga into her program. The most important part of her training program has been doing long rides out on the trails with Leon.

The Western States Trail Ride, popularly called The Tevis Cup, is a 100 mile endurance ride. The amateur event has been held annually since 1955. The ride is sanctioned by the American Endurance Ride Conference (AERC) which has recognized Tevis as the founding ride of endurance riding. Much of modern endurance is based on the pioneering efforts of the Western States Trail Foundation which sponsors the Tevis Cup.

We wish Leon the best in his recovery and who knows, maybe we will be writing about Cristine, Leon and the 2017 Tevis Cup around this time next year!