FoodFIT Friday: To Wheat, or Not To Wheat?

To Wheat, or Not To Wheat? : Gluten, Grains and Health 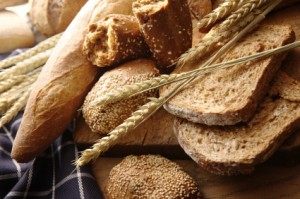 Everyone seems to be jumping on the “Gluten-Free” wagon these days. Every day, more GF products are available, and people are seeing dramatic changes in their health when they go “gluten-free.”

But what’s the problem with gluten? And is it gluten, wheat, or all modern grains?

According to Dr. William Davis, a cardiologist who has published a book all about the world’s most popular grain, modern wheat is “a perfect chronic poison.”

But, he says, unless you have been diagnosed with gluten sensitivity or Celiac Disease, gluten isn’t the issue. It’s gliadin, a new protein that has been bred into modern wheat.

“I’m not addressing people with gluten sensitivities and Celiac Disease.” He says. “I’m talking about everybody else because everybody else is susceptible to the gliadin protein that is an opiate. This thing binds into the opiate receptors in your brain and in most people stimulates appetite” such that people are eating more, and more wheat.

Davis says that people who turn away from wheat, which is largely what the gluten-free diet entails, drop substantial weight, and reverse chronic illness. “We’re seeing hundreds of thousands of people losing 30, 80, 150 pounds. Diabetics become no longer diabetic; people with arthritis having dramatic relief. People losing leg swelling, acid reflux, irritable bowel syndrome, depression, and on and on every day.”

But, he stresses that it’s not all grains that cause the problem, it’s a wheat issue.

On the other hand, Dr. Loren Cordain, the founder of the Paleo Diet, believes that all grains are harmful to the human digestive system and health, and must be avoided. The Paleo principle maintains that humans aren’t designed to eat grains, which have anti-nutrients – lectins and phytic acid (phytates) — which bind to important minerals depleting iron, magnesium, zinc and calcium, make grains hard to digest and irritating to the intestines (causing Leaky Gut), and are the source of many autoimmune diseases. Followers of the Paleo Diet report health improvements after eliminating all grains from their diets.

But Sally Fallon, author of “Nourishing Traditions” and one of the world’s experts on the benefits of traditional foods, believes that if grains – including wheat — are properly prepared – soaked and sprouted or fermented—the anti-nutrients that irritate the gut linings are eliminated. For thousands of years, humans have soaked, sprouted and fermented grains, nuts, seeds and legumes and didn’t have the host of health problems we modern humans have, and many people who can’t tolerate regular wheat, have no problem with fermented (sourdough) or sprouted grain breads.