Instructor of the Month, News, Workouts

Instructor of the Month: Alane Burke 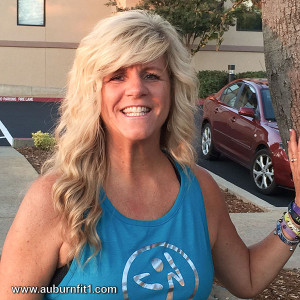 Alane has been married to the love of her life for the past 25 years and during that time they raised four amazing kids together. After being a stay at home mom for 15+ years she got a part time job. A few months later she severely injured her lower back. Five years later and 35 pounds heavier she was at her lowest point in life. She was discouraged and had no idea where to begin and that’s when Zumba found Alane.

A jock in high school but never a dancer, she attended her first Zumba class and was hooked! Alane quickly learned that it’s okay to have two left feet because in Zumba class, individuality is encouraged! She not only burned calories, but met an incredible group of men and women who are now lifelong friends.

Alane finds Zumba to be incredibly therapeutic through its music, moves, and laughter. She quickly realized that she didn’t have to be a professional dancer or have dance experience to attend a Zumba class because it really just consisted of having a good time, doing the same steps, but adding your own style, flair and flavor to the routine.

After a year of attending Zumba classes, Alane became certified and a year after that she became certified in Zumba toning. Her goal is to motivate people just like herself who were afraid and intimidated to try group exercise. Her desire is to encourage others to get active after a serious injury or setback, to motivate people to make a change in order to live a healthy lifestyle and to try out this disguised method of exercise, Zumba.

Over the past few years as an instructor, Alane has found that Zumba offers more than just exercise with associated health benefits. “Zumba touches people in so many different ways.” It’s rewarding for Alane to witness someone rediscover their joy, confidence, and self-esteem.

Alane invites you to join her on Monday mornings, to move, motivate, energize and inspire yourself. If you want to try it but you’re afraid to take that first step bring a friend and you can experience it together and party yourselves into shape! “And remember, there are no mistakes in this class, only accidental solos! “