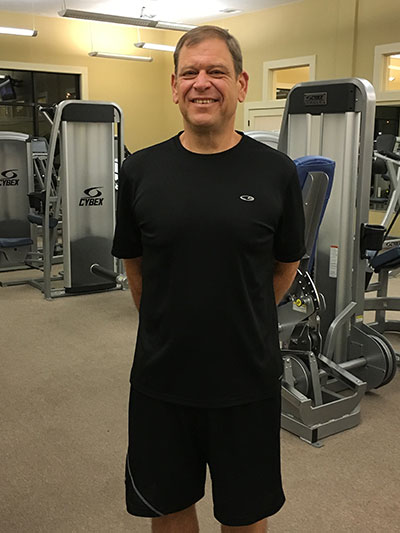 Sean Russell has been a member of Auburn Fit1 since June of 2015. When manager Jamie Vinciguerra first met Sean, he was mostly walking and had lost approximately 60 pounds.

Sean still walks, but he is also at Auburn Fit1 on Tuesday and Thursday mornings for the 5:30a.m. Boot Camp class, the 5:30p.m. Tuesday and Thursday Body Shred class, and the Weights, Core and More class. Plus he attends the Pure Strength class on Wednesday nights at 5:30 p.m. If he isn’t attending a class, you may see Sean lifting weights or walking around the beautiful Auburn area trails.

Sean enjoys taking group fitness classes with Kristin Cummings and Robert Payne.
Sean and his son also participated with 8 others from Fit1 this past July in the 3.2 mile Obstacle Run that was hosted by the Auburn Recreational District.