Janet has been a member of Auburn Fit1 since June of 2012.

Several years ago while attending a yoga class at the gym, a lady mentioned she had recently walked the 500 mile Camino Santiago in Spain. Her journey immediately peaked Janet’s  interest.

So, on October 5, of this year, Janet and  her sister, Judy  began the walk in St. Jean-Pied-de-Port, France, and arrived 500 miles later at the Cathedral in Santiago, Spain on November 11. Their luggage, was a 15 pound backpack, which thet wore every day and which held two changes of clothes and necessary possessions. The two women walked an average of 13 miles a day (and slept in 40 different beds). Janet was most impressed by the friendly, happy people she met every day along the way from many different countries. 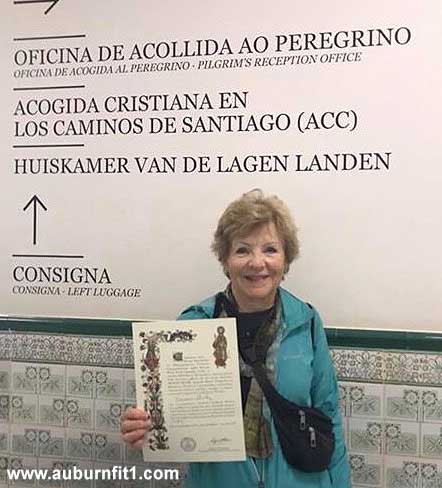 To train for the Camino Janet walked every day, increasing the mileage every week for a month. She also took Jamie’s Pilates classes 2 or 3 times a week. Janet appreciates the  encouragement and support as well as the support of many of the members of the gym who cheered her on throughout this amazing journey.

( Janet says “I keep busy with friends and family. I have 2 children, 3 grandchildren, and one great grandchild and 2 cats and I take art classes.  I am 76…and always wondering what’s next…”)