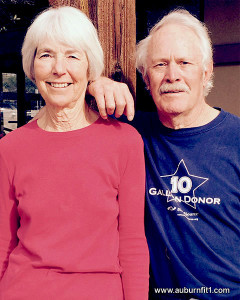 Happy Birthday Becky and Rex! Both will be celebrating their Birthday’s in the month of March. Becky will be 69 on March 6th and Rex will be 71 on the 28th. Rex and Becky have been members of Auburn Fit1 since its opening. Their lives are centered around activities, mostly outdoors; hiking, biking, and Becky is still running. When they are not working out in the beautiful Auburn area, they can be found in the gym 2-3 days per week.

Both Becky and Rex enjoy the cycle, cycle-tone classes and lifting weights. When asked about fitness goals, Rex replied that he is focusing on his upper body strength. Becky would like to maintain her strength and fitness.

Becky and Rex love that they can ride their bikes to Auburn Fit1. They appreciate the great instructors, management, equipment and classes. Auburn Fit1 is not only a place to work out, but also a social outlet with great members!