Robert was born on April 23, 1958, in Torrance CA, near the ocean. While living in Southern California, Robert was very active, causing shoulder injuries and seven surgeries! In 1985, he survived an upper chest wound, when he was stabbed from behind on Labor Day weekend.

Roberts’s first marriage blessed him with two handsome and intelligent sons who turn 29 and 31 years old this year.  In 1998, shortly following his divorce, Robert moved to Auburn where he met his current wife Sherrie. They have been married for 19 years. Robert has been an automotive technician for the last 30 years as well as a warehouse forklift driver. 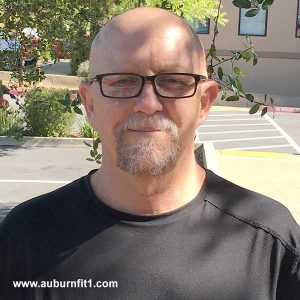 At 57, Robert felt he was in the best shape of his life; He was exercising a lot at a local gym in Auburn, which then closed down and brought him to Auburn Fit1. At that time, he was biking 80-100 miles per week as well as participating in a full weight regiment. Then in June of 2015, he experienced a subluxation of his right hip while working in the freezer department at Walmart.  Since he was injured while working, he found workers comp to be a nightmare and on his own dime, began massage therapy, mild PT and Pilates on the reformer, which provided pain reduction through stretching and strengthening. He did require surgery for a torn labrum and abrasion of the femoral head, but preconditioning prior to surgery helped him tremendously.

“I`m really glad I found Auburn Fit1 as my new home for health and wellness, I love the kind professional staff, age demographics, mild atmosphere and equipment. My workout consists of 30-60 minutes on the stationary bike, 15- 20 minutes on the elliptical, mild weights-Thera band 4 to 6 days per week”.

This is great because Robert’s doctor has prescribed the stationary bike on a daily basis for 15-30 minutes!

“Church Fellowship, my family (especially my grandkids), fishing, walking and being outdoors. One thing I do miss, body surfing in the ocean every day after work”.