Member on Fire for September, 2016 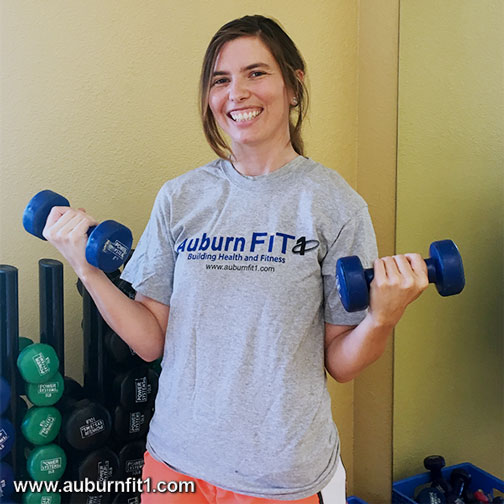 Before joining Auburn Fit1, Jackie had never been a member of a gym before. Since starting Kristen’s Body Shred class last fall, Jackie has lost 20 lbs (from 145 to 125). She says, “I also have a big increase in muscle definition, so I suspect I’ve lost more than 20 lbs in fat since I’ve gained muscle. The best part is that I feel great, better than I ever have before!”
Jackie says that she’s found that attending a class gives her a sense of accountability to push herself much harder than she would otherwise. “I stay at the gym longer and with the classes being scheduled, I can’t use the ‘Oh, I’ll go to the gym tomorrow’ excuse.”

Jackie likes the variety of instructors at Auburn Fit1. Whenever we have a substitute, instead of being bummed, she’s always excited to have Dee or Pam there. Each instructor has a different focus or method—and each one provides alternatives for people at varying levels of fitness.

“Before joining Fit1 I was almost completely inactive other than the fact that my work was on my feet,” said Jackie. “I love that my ‘classmates’ are of all ages and abilities. Everyone is so friendly and it’s fun to see the same people each week.”

Outside of Fit1, Jackie is interested in wildlife conservation. She volunteers locally at Gold Country Wildlife Rescue, mostly with social media and fundraising, but has started with direct rehabilitation and care at their wildlife center. She says, when her work schedule isn’t crazy, she’s lucky to be able to foster and rehabilitate baby squirrels for release back into the wild. Jackie has also done fundraisers and pro-bono graphic design work for wildlife NGOs ranging from Indonesia with tigers to Mozambique with lions. She recently was selected as one of two design winners in an international design competition hosted by US Fish and Wildlife Services concerning elephant poaching. Her design will be placed in airports, zoos, museums, and public places all around the world to raise awareness about the elephant poaching crisis.

Because she can’t just stop there, Jackie also has her own small business called Sparkly Pony; Her designs have been featured in over a dozen magazines and published in two books (as well as a pop-up shop curated by Martha Stewart).