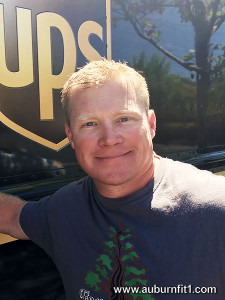 Aaron has been a member of Auburn Fit 1 since June 2014! Happy 2nd anniversary Aaron! When Aaron first came into the club for a tour, Manager Jamie Vinciguerra thought he was arriving to deliver a package. Aaron has been with UPS for 22 years, and arrived that day driving his company truck and in uniform.
Aaron was born and raised in Auburn, California. His job is tough in that there is not much flat land and he is often running up and down hills to deliver packages. Aaron loves working in the town of Auburn and loves his customers. He hopes to never leave his Auburn route because of his customers.
When he takes his workout lunch break, it’s to lift weights. He stops at the gym four to five days a week to not only keep in shape for his job, but to also stay in shape for the outdoor life that he loves.
Aaron snowboards, on average, 35 times a year at Heavenly and Kirkwood. He also leads backpacking groups of eight to Yosemite twice a year. His most recent trip will be the second week of June; he is leading a group on the Vogelsang Loop in Tuolumne Meadows. The trail is buried in seven feet of snow and the group is preparing with snowshoes, clothing, compass, and GPS to be sure they do not lose the trail. Aaron has an 18-year-old son who often accompanies him on his adventures.
Aaron’s second passion is music. He runs production for Guitarfish Music festival in Cisco Grove, the last four days of July. He recommends checking it out if you enjoy music. Aaron is often posting local music group presentations on our bulletin board.
Thanks Aaron for your membership at Auburn Fit 1 and for sharing your knowledge with our members and the community!