Member to Notice for October 2018

We get to see a lot of amazing accomplishments and athleticism at Auburn Fit1 and Jay Cooper is an example. He contacted Fit1 following having a second knee replacement. He began working with Dee Evans and what a change I personally have seen in his progress. I asked Jay and Dee to share a little bit about what they have done; please continue reading as I am sure you too will be amazed! 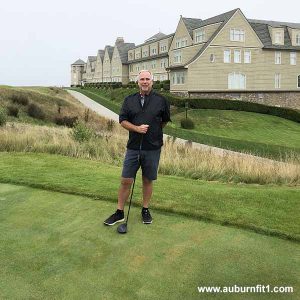 Since joining Auburn Fit1, Jay is happy to share that Fit1 has allowed him to get back into shape. With help from trainer, Dee Evans, Jay has learned how to rehab correctly and work the right muscles the proper way while stretching and strength training. Jay is pleased because he has regained his strength, flexibility and feelings of health that he so had missed. He is also much more active and is golfing again. Jay is also working towards the goal of being able to ski during the upcoming season.

When we asked Jay what advice he would give to others that may be in a similar situation, he stated that for anyone that goes to the gym, and those that don’t because of whatever reason, consult a pro. He said that he thought he knew it all when it came to working out but was wrong. Plus, if the person is rehabbing like he was, it should be a no brainer to hire a trainer because you’ll be glad you did! He went on to say that even if you have no physical issues, hire a trainer and stop doing the same workout over and over again.

Jay also mentioned that he has had many trainers, coaches etc. in his life and hats off to Dee, Jamie and the staff at Fit1. It is a a very cool place!