If you haven’t met mom and son team, Desiree and Stephen Riojas, you’re missing out! These two athletes never cease to amaze me with their dedication and perseverance at Fit1. They are an inspiration to everyone around them and I also love the LOVE that these show each other. Desiree joined Fit1 about 8 months ago. 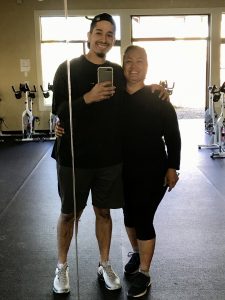 Stephen is as much a joy to have at Fit1 as his mother. A true athlete and gentleman, Stephen had a wake-up call around age 26. Not only was he overweight at 235 pounds, but he had some health issues that had recently appeared. Stephen had a friend who was a personal trainer and he engaged the trainer to get started on his fitness journey and he took up Muay Thai, Track and Sprints, Kickboxing and CrossFit, blending all these sports together in his work out routine. When he received the call from his mom to work out together, he was more than ready.

There’s so much more to write about with this dynamic duo – I simply don’t have space. I’m so grateful that they chose Fit1 for their fitness journey and I look forward to learning more about them as they knock out challenges together. Desiree and Stephen, you make my day every time you are in the gym.

At the time, Desiree was overweight and used a cane to help her walk because of a bad hip. One day, she realized that she could do something about her quality of life – that she could take more control of her life. She told me (and I so admire her for taking this stand) that ‘enough was enough’ and that ‘she wasn’t going to do this anymore’. Desiree threw away her cane and called son Stephen. Together they decided to become work out buddies and tackle the gym together.

Now, less than a year later, both are reaping the benefits of their hard work. Both are sleeping better, both have noticed an improved mental outlook, and both are stronger, more fit and in control of their lives. I think the thing that I love so much about these two (besides them being just plain wonderful people) is that they are always upbeat about their training. They constantly challenge their bodies in new ways to improve their fitness. In fact, mom and son have signed up for the new small group Olympic Weightlifting class! Desiree says that she is doing things that she never imagined she could do. She now paddleboards, hikes, bikes and joins her family in activities that she used to opt-out of before her life-changing commitment to fitness. Stephen has his weight under control and is extremely fit. His knowledge of training is extensive, and I always take a peek out of the office when they are at Fit1 to see what they are doing that day. Most impressive and endearing is the love and respect that they have for each other. Watching them together makes your heart sing.