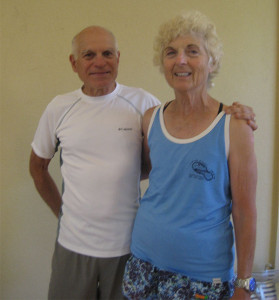 Ray and Janet have been members of Auburn Fit 1 since May of 2014.  Perhaps even more impressively, they have been married for 40 years!

Janet has been active nearly all of her adult life. She has been an Ultra distance runner for over 30 years—earning her Western States 100 buckle in 1994, completing 31 American River 50 milers, 26 Way Too Cool 50K races, and many other trail Ultras. Janet just completed her ninth Headlands 50K and ran her second fastest time.

Janet thanks Fit 1 for keeping her fit and shared “you’re never too old to get stronger.”

Ray enjoys the discipline of attending Fit1 evening classes. He relies on the instructor leading the class rather than doing it on his own. Ray looks forward to the Monday and Wednesday yoga classes to help him stay flexible. At 69 years “young,” Ray says he finds it harder to stay in good physical condition. He takes a one-hour walk each morning, followed by laboring on his and Janet’s 4.6 acre property.

“Fit 1 has given me to the chance work out if I want, when I want,” Ray said. “The classes are great, as are the instructors. I find the facility to be in great shape and well kept.”

Ray and Janet are regulars at a minimum of two yoga classes a week and they also attend Dee’s strength training class on Wednesday’s at 5:30 p.m.