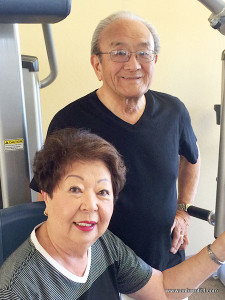 Irene has been a member of Fit 1 since June of 2013. Manager, Jamie Vinciguerra first met Irene and Ray in May of 2014 when they arrived at the Auburn Fit 1 office to inquire about adding Ray to the membership.Two and half years ago, Ray had to have his left leg amputated above the knee due to necrotizing fasciitis (flesh eating bacteria). Irene and Ray were preparing for a trip to Japan and Ray was especially interested in developing some upper body strength to assist with lifting their luggage and to also increase his hip strength to aide in walking with is prosthetic leg.

Irene and Ray can be found in the gym 3-5 days per week. Irene enjoys riding the recumbent bike, and they both utilize the Cybex machines. Ray often walks in the group exercise room.
Irene is 73 years young and would like to lose a little weight around her midsection. She will be attending her 55 class reunion in September. Ray will be 82 years young on September 2nd. He has longevity in his family–his father lived to be 105 and his mother lived to be 98 years of age. Ray is now interested in working on being able to balance on his prosthetic leg.